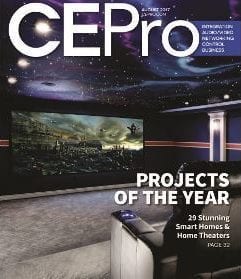 Read the article at CEPRO.com 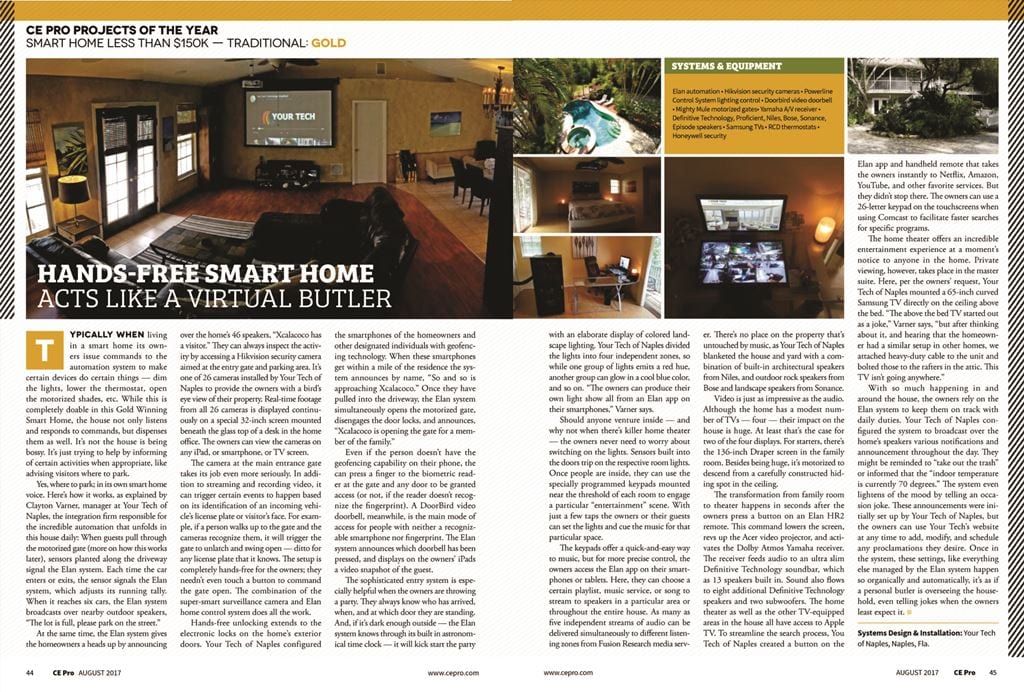 Typically when living in a smart home its owners issue commands to the automation system to make certain devices do certain things – dim the lights, lower the thermostat, open the motorized shades, etc. While this is completely doable in this Gold Winning Smart Home, the house not only listens and responds to commands, but dispenses them as well. It’s not the house is being bossy. It’s just trying to help by informing of certain activities when appropriate, like advising visitors where to park.

Yes, where to park; in its own smart home voice. Here’s how it works, as explained by Clayton Varner, manager at Your Tech of Naples, the integration firm responsible for the incredible automation that unfolds in this house daily: When guests pull through the motorized gate (more on how this works later), sensors planted along the driveway signal the Elan system. Each time the car enters or exits, the sensor signals the Elan system, which adjusts its running tally. When it reaches six cars, the Elan system broadcasts over nearby outdoor speakers, “The lot is full, please park on the street.”

At the same time, the Elan system gives the homeowners a heads up by announcing over the home’s 46 speakers, “Xcalacoco has a visitor.” They can always inspect the activity by accessing a Hikvision security camera aimed at the entry gate and parking area. It’s one of 26 cameras installed Your Tech of Naples to provide the owners with a bird’s eye view of their property. Real-time footage from all 26 cameras is displayed continuously on a special 32-inch screen mounted beneath the glass top of a desk in the home office. The owners can view the cameras on any iPad, or smartphone, or TV screen.

The camera at the main entrance gate takes its job even more seriously. In addition to streaming and recording video, it can trigger certain events to happen based on its identification of an incoming vehicle’s license plate or visitor’s face. For example, if a person walks up to the gate and the cameras recognize them, it will trigger the gate to unlatch and swing open – ditto for any license plate that it knows. The setup is completely hands-free for the owners, they needn’t even touch a button to command the gate open. The combination of the super-smart surveillance camera and Elan home control system does all the work.

Hands-free unlocking extends to the electronic locks on the home’s exterior doors. Your Tech of Naples configured the smartphones of the homeowners and other designated individuals with geofencing technology. When these smartphones get within a mile of the residence the system announces by name, “So and so is approaching Xcalacoco.” Once they have pulled into the driveway, the Elan system simultaneously opens the motorized gate, disengages the door locks, and announces, “Xcalacoco is opening the gate for a member of the family.”

Even if the person doesn’t have the geofencing capability on their phone, they can press a finger to the biometric reader at the gate and any door to be granted access (or not, if the reader doesn’t recognize the fingerprint). A DoorBird video doorbell, meanwhile, is the main mode of access for people with neither a recognizable smartphone or fingerprint. The Elan system announces which doorbell has been pressed, and displays on the owners’ iPads a video snapshot of the guest.

The sophisticated entry system is especially helpful when the owners are throwing a party. They always know who has arrived, when, and at which door they are standing. And, if it’s dark enough outside – the Elan system knows through its built in astronomical time clock – it will kick start the party with an elaborate display of colored landscape lighting. Your Tech of Naples divided the lights into four independent zones, so while one group of lights emits a red hue, another group can glow in a cool blue color, and so on. “The owners can produce their own light show all from an Elan app on their smartphones,” Varner says.

Should anyone venture inside – and why not when there’s killer home theater – the owners never need to worry about switching on the lights. Sensors built into the doors trip on the respective room lights. Once people are inside, they can use the specially programmed keypads mounted near the threshold of each room to engage a particular “entertainment” scene. With just a few taps the owners or their guests can set the lights and cue the music for that particular space.

The keypads offer a quick-and-easy way to music, but for more precise control, the owners access the Elan app on their smartphones or tablets. Here, they can choose a certain playlist, music service, or song to stream to speakers in a particular area or throughout the entire house. As many as five independent streams of audio can be delivered simultaneously to different listening zones from Fusion Research media server. There’s no place on the property that’s untouched by music, as Your Tech of Naples blanketed the house and yard with a combination of built-in architectural speakers from Niles, and outdoor rock speakers from Bose and landscape speakers from Sonance.

Video is just as impressive as the audio. Although the home has a modest number of Tv’s – four – their impact on the house is huge. At least that’s the case for two of the four displays. For starters, there’s the 136-inch Draper screen in the family room. Besides being huge, it’s motorized to descend from a carefully constructed hiding spot in the ceiling.

The transformation from family room to theater happens in seconds after the owners press a button on an Elan HR2 remote. This command lowers the screen, revs up the Acer video projector, and activates the Dolby Atmos Yamaha receiver. The receiver feeds audio to an ultra slim Definitive Technology soundbar, which has 13 speakers built in. Sound also flows to eight additional Definitive Technology speakers and two subwoofers. The home theater as well as the other TV-equipped areas in the house all have access to Apple TV. To streamline the search process, Your Tech of Naples created a button on the Elan app and handheld remote that takes the owners instantly to Netflix, Amazon, YouTube, and other favorite services. But they didn’t stop there. The owners can use a 26-letter keypad on the touchscreens when using Comcast to facilitate faster searches for specific programs.

The home theater offers an incredible entertainment experience at a moment’s notice to anyone in the home. Private viewing, however, takes place in the master suite. Here, per the owners’ request, Your Tech of Naples mounted a 65-inch curved Samsung TV directly on the ceiling above the bed. “The above the bed TV started out as a joke,” Varner says, “but after thinking about it, and hearing that the homeowner had a similar setup in other homes, we attached heavy-duty cable to the unit and bolted those to the rafters in the attic. This TV isn’t going anywhere.”

With so much happening in and around the house, the owners rely on the Elan system to keep them on track with daily duties. Your Tech of Naples configured the system to broadcast over the home’s speakers various notifications and announcements throughout the day. They might be reminded to “take out the trash” or informed that the “indoor temperature is currently 70 degrees.” The system even lightens the mood by telling an occasional joke. These announcements were initially set up by Your Tech of Naples, but the owners can use Your Tech’s website at any time to add, modify, and schedule any proclamations they desire. Once in the system, these settings, like everything else managed by the Elan system happen so organically and automatically, it’s as if a personal butler is overseeing the household, even telling jokes when the owners least expect it.